Marshall Amplification is synonymous with guitar amplifiers since 1962, and its
offerings are still as relevant today as they were back then – and just as
popular. When it comes to audio it’s fair to say that Marshall knows a thing or
two and Marshall’s state-of-the-art recording and mixing studio is a testament
to their expertise. However, creating the perfect studio wasn’t straightforward,
even for experts like Marshall.

“I don’t think anyone at Marshall, including myself, had any idea of… just how
much is involved in building a world-class recording studio”, said Adam Beer,
Studio Manager at Marshall. What complicated the build over and above the
normal difficulties was the installation of a vintage Neve 8048 console.
Marshall’s Neve is a classic 70’s desk that provides warmth, clarity, and that
sought-after Neve sound. It was originally in the Pathé Marconi Studio D in
Paris. 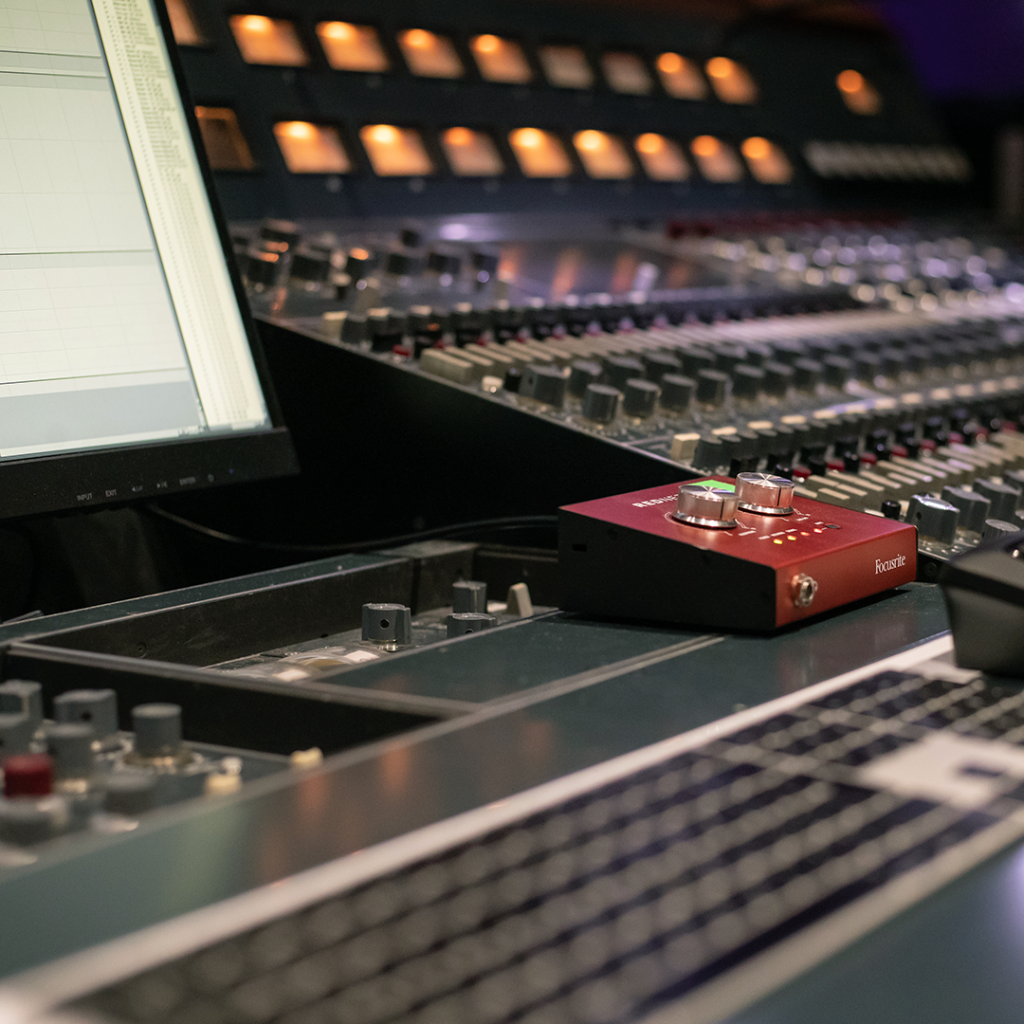 “[When we got the Neve] we split the console in two, the patch bay at the end
became the centre. This enables you to have Pro Tools, your mouse and your
keyboard looking straight at the console”, Adam continues.

“[Arranging it like this] meant we were able to then add that ginormous patch
bay next to our lovely RedNet system on the side. It’s two consoles that mix
together, which means that it sounds like nothing you’ve heard before. Drums
and guitars absolutely sing through it. It’s a real marvel. And the fact that it’s
been completely rebuilt by an expert means that every single part of it works.”

“Before the RedNet R1, I would have a talkback mic in my makeshift control
room to make sure I could talk to the talent and let them know that we’re
rolling and stuff like that. With the R1, that’s got four different talkback
routings. So, when we do a shoot now, I’ve got a talkback to the band with the
individual headphone boxes, I’ve got one routed for the label, I’ve got a

talkback to the video crew and I’m using the R1 as my main headphone
amplifier – and it’s a really powerful, good-sounding headphone amp.”

The Neve console is the centrepiece of the studio, but that’s not all the vintage
equipment that Marshall use.

“Not only have we got the usual things: LA2As, 1176s, but we’ve got some
really special BBC Neve compressors with passive 320 millisecond delays in
them. We use them all the time and it makes everything sound massive. We’ve
got a couple of PYE compressors that Blake made himself from broadcast PYEs,
which are really amazing. We’ve got all this wonderful gear, but we use it with
the RedNet into Pro Tools Ultimate, and that really gives us the flexibility to
use the vintage gear in a really tasteful way.”

As well as an impressive list of equipment, Marshall Studio offers a fantastic
range of facilities. “The building itself is not just your usual recording studio.
It’s got a huge live room, a huge live space for 250 people” says Adam.
“There’s a fully licensed bar and a wonderful new room upstairs, which is used
as an artists’ development space and a mix room.” 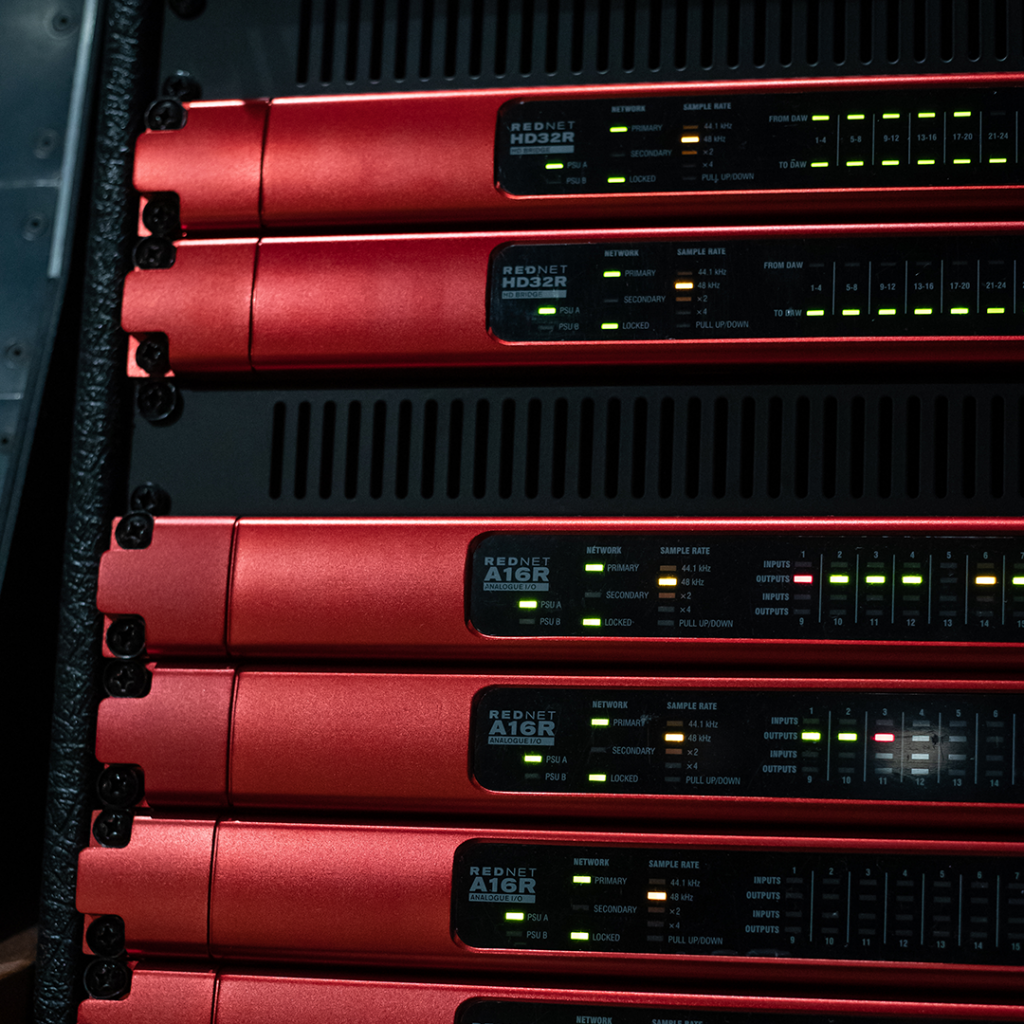 “I had no prior experience of RedNet before I started here, and it is definitely a
story of conversion. I thought, ‘Well, I’ll give it a go, I mean, I’ve heard good
things about this RedNet system,’ and honestly, I’ve been blown away” says
Adam.

“For us, the most important thing is the conversion. The greatest compliment I
can give to the Focusrite conversion is, I don’t ever worry about it or notice it.
Everything we do here has the lovely, warm Neve punch. The microphones,
everything sounds great, because the conversion is great. It’s really been
instrumental in us maintaining the wonderful Neve sound that we want to
have here, and the added bonus of course, is the Dante. Having the Dante
capability has meant that we are able to have some Martin Audio speakers in
the roof of the live room for playback.”

Adam continues “It’s been the perfect solution for us. We’ve got ceiling
speakers out in the foyer by the bar area that are Dante enabled, it means we
can share what we’re doing in the control room with people that perhaps are
outside of the control room having a drink, members of the band. Once we
discovered the options it [Dante] gave us, it’s been a fantastic piece of
technology that’s really helped us make this place as multifunctional as it is.”

“The future of the studio really is just to continue making great records in the
studio, not just for ourselves, but for other companies and other producers”
comments Steve Tannett, Musical Director of Marshall Amplification.

“We built it to be exactly what it is, a world-class recording studio. If an artist
or a producer wants to use the studio, it’s as simple as just calling us and
saying, “Are you available on such and such a date?””

“Our expansion is really just to continue churning out amazing quality music
from this recording studio. As long as everyone who comes into Marshall to
record leaves with the sense that they’ve had the best possible time, with the
best possible people, and get the best possible result — that’s our mission.”