Having released development partner Muramasa Audio’s Bassment to widespread critical acclaim a little earlier this year as an all-in-one single-screen bass guitar solution, independent development teams federation United Plugins is proud to announce availability of Bassment Core — creating a ‘light’ version of Bassment that effectively favours power and simplicity over complexity by peeling off its bigger brother’s additional effects to form an amp- and cab simulation-retaining plug-in that quickly cuts to the desired bass tone-creating chase — as of June 28…

Following the tried-and-tested formula of the Electrum and Electrum Core plug-ins preceding it, by first releasing Bassment as an all-in-one single-screen bass guitar solution and then Bassment Core — creating a ‘light’ version of Bassment that effectively favours power and simplicity over complexity by peeling off its bigger brother’s additional effects to form an amp- and cab simulation-retaining plug-in that quickly cuts to the desired bass tone-creating chase, Muramasa Audio has now completed a family of all-in-one single-screen solutions aimed at guitarists and bass guitarists alike.

An amplifier is clearly crucial to creating any desired bass tone, and, as such, Bassment Core creatively cuts to the chase with its AMP acting as a crucial component, thanks to its input GAIN going all the way from gentle to brutal settings alongside perfectly tuned five-band (LOW BASS, HIGH BASS, LOW MIDS, HIGH MIDS, and TREBLE) EQ controls; a self-explanatory DRY/WET control; a Parallel saturation/distortion component with six associated controls combining to maximise varying sounds; as well as Bass, Mid, and Treble controls (for controlling the way that users work with bass, mid, and treble frequencies, respectively). Indeed, it is well worth mentioning that Bassment Core pays particular attention to bass — as one might expect — by including dedicated COMPRESSION, LOW PASS filtering, and AGGRESSION and PRESENCE controls to help the all-important sound fight through the mix; middle frequencies can duly determine the final bass character, so not only can users of Bassment Core control FREQUENCY and LOW-CUT but also midrange BRIGHTNESS and COLOR. Clearly one amp is enough, then, if it is universal, as is the case with Bassment Core — unlike when working with most hardware.

However, hardware comparisons are almost impossible to come by when it comes to talking about Bassment Core’s creative Cabinet component — comprising 15 simulations combined with 15 adjustments to assemble a true virtual amp simulator with several parameters to produce a much smoother and more natural sound that avoids all the unnatural resonances present with almost all IRs (Impulse Responses). Creative controls therein include ‘Speaker’ — select from 16 predefined speaker sounds based on some classic speaker measurements that provide the basis of the cabinet sound; CHARACTER — customise the cabinet sound (to produce over 300 virtual cabinets when working with ‘Speaker’); OUTPUT — controls the output gain; and TILT — makes the cabinet sound darker or brighter using a very natural tilt filter. 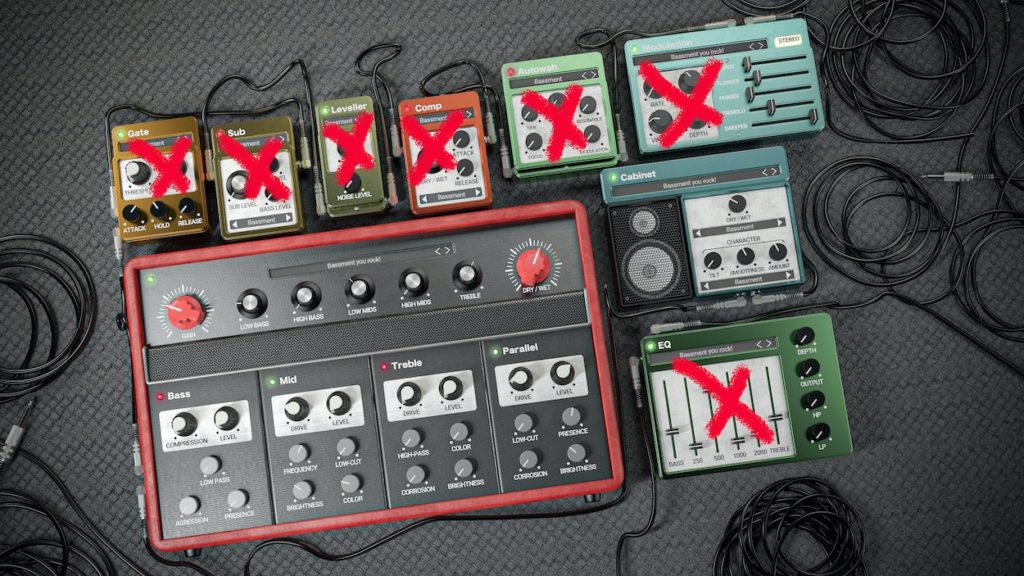 Following in the fanciful footsteps of its Bassment plug-in predecessor, Bassment Core has an ace up its virtual sleeve: hitting the ANALYSE INPUT LEVEL button before hitting the strings of a bass guitar as hard as its player intends to perform results in Bassment Core automatically setting up its INPUT level to match the signal strength with the particular processor’s ideal working point — perfect gain-staging and volume balance to help get the most out of Bassment Core.

Creating a ‘light’ version of Bassment that effectively favours power and simplicity over complexity by peeling off its bigger brother’s additional effects to form an amp- and cab simulation-retaining plug-in that quickly cuts to the desired bass tone-creating chase within a single window while making use of its internal 64-bit audio processing to handle any sampling rate up to 192 kHz (or even higher) plus smart bypass and intelligent sleep on silence attributes has worked in Muramasa Audio’s favour when it came to following the tried-and-tested formula of the Electrum and Electrum Core plug-ins preceding it in order to arrive at Bassment Core. No need for Bassment users feeling the need for (even more) speed to feel left out, though, as they can now use Bassment Core for free since the Bassment license automatically activates Bassment Core, with welcomed access to the best of both (Bassment) worlds — whenever the need suits them.

Muramasa Audio’s Bassment Core is available to purchase at an almost giveaway introductory promo price of only €9.00 EUR until the end of August 2022 — rising thereafter to an attractive regular price of €49.00 EUR — as an AAX-, AU-, VST-, and VST3-compatible plug-in (using internal 64-bit audio processing capable of handling any sample rate) directly from United Plugins here: https://unitedplugins.com/BassmentCore/

A 15-day, fully-functional trial version of Bassment Core for macOS 10.10 and newer and Windows 8/10 can be downloaded for free from here: https://unitedplugins.com/download/ (Users can still use the plug-in after the 15-day trial expires, but will lose access to some parameters.)

Note that no iLok, dongle, or internet access is required for Bassment Core activation. (All United Plugins software uses license files for activation and owners can freely use purchased software on all their computers as long as they are the user.)