Simon Goff’s musical journey has been one of detailed, exploratory expression. The Berlin-based composer/producer has built a career on creating and arranging improvised music and finding unique outlets for this composition style in both ambient musical styles as well as conventional mediums such as film, television, and advertising. In addition to his work on the Grammy-winning soundtracks for Joker and Chernobyl with composer Hildur Guðnadóttir and producer Sam Slater, Goff has also produced albums alongside composers such as Jóhann Jóhansson and Yair Elazar Glotman as well as latest ambient work, Vale. A key component of his creative flow has been homing in on the hooks and themes hidden within the minute details of the music he creates. To ensure he catches all of them, Goff has relied on Amphion One18 monitors for all of his critical listening.

Organized sound for endless inspiration
​Goff’s singular approach to composition and production is partly drawn from his training as a classical violinist. Although skilled at multiple instruments, the detailed performance requirements of classical on stringed instruments attuned his ears and sensibility towards the subtle nuances possible in sound. When his interests in pop, rock, and more obscure, independently produced music led him to pursue his own engineering and production, the two worlds naturally collided. “With a string or woodwind instrument, there’s so much variation in the actual playing and when you train in classical music you become aware of all of those details and the emotional impact they can play in a composition,” he said. “This led me to think of sound in a larger context and what could be done by approaching it from that standpoint — organizing sounds for an intended impact without being bound to conventional compositional structure.” 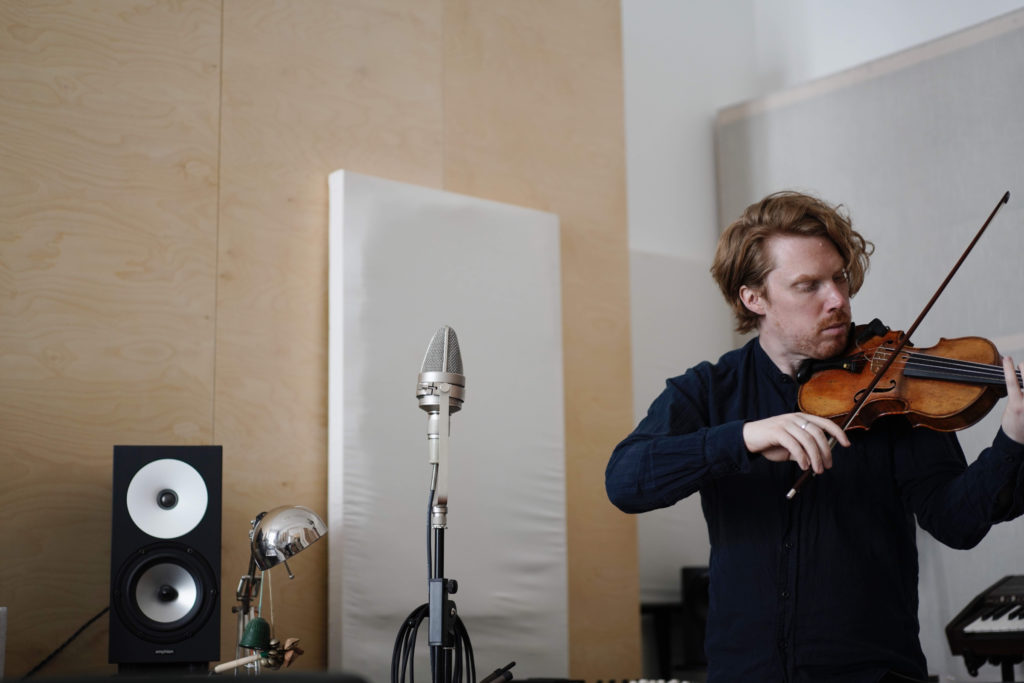 At the same time, Goff’s experiences working alongside Guðnadóttir on the Joker and Chernobyl soundtracks showed him how these ideas could work outside the contexts of pure ambient or experimental music. He adapted the methods of field recordings and sound collage into his composition workflow and found a new way to create memorable pieces that could serve many musical purposes. “Embracing this method of composition requires playing and recording all kinds of sounds and then listening to what you’ve created purposefully to find the melodies and rhythms hidden within,” he explained. “It’s an endlessly inspiring way to work and you find a lot of magic as you are mangling and reimagining these sounds.”

“Amphion has made such a big difference in working this way, because they produce sound in such a clear, detailed way. You can hear everything and really ‘craft’ the differences in playing, recording, and sound manipulation.”

Small room creativity, big studio sound
​Goff works primarily out of his small private studio which he describes as an ‘ecosystem of creativity’, designed to suit his improvisation-heavy methodology with as few barriers as possible between real instruments and in-the-box production. As such, he values tools that contribute to a seamless workflow that operates at the speed of both his imagination and the realities of industry deadlines. “I love the creativity of a one room studio, but it does require superior monitoring as you are often in a small space,” he said. “When I started using Amphion it made me more aware of my room and had an immediate impact on my mixes. Hearing ‘the truth’ so clearly allowed me to work more quickly and decisively.”

The ability to be more decisive also extends to the reactions of his clients who are often hearing his compositions while he is in the process of creating them. Mixing as he goes, Goff says that there often isn’t time to send demos and that the projects need to reflect a high-quality standard from the get-go. “You need to be able to rely on things sounding good ‘in the moment’ as the turnaround times are often very short,” he explained. “It all needs to sound great and translate right away, especially if the client approving the work falls in love with that first mix!” “Being able to mix so confidently on my One18s while I am creating has been invaluable and saves so much time,” he continued. “I always know that I can carve out space for any sounds or instruments right away.”

Goff’s latest work Aerial Objects, due out on July 15th via BMG, is a collaboration with Katie Melua and can be seen as a culmination of his creativity and working methods, melding ambient composition alongside a singer/songwriter sensibility. As with all of his productions, he has used the experience as a fresh opportunity to explore the compelling possibilities of organizing sonic details to moving, emotional intent. “We live in such a fascinating time because there are so many ways of finding your own voice through the collision of instruments and recording technology,” he said. “Using Amphion has helped me to make the most of those collisions and express my own unique mix as a performer, composer, and producer.”