As an aptly-named virtual effect mainstay of the Rob Papen plug-in stable for over a decade, RP-Distort duly took distortion to a new level when let loose upon an appreciative music technology world; well worth the wait as a worthy successor is RP-Distort 2, with which Rob Papen pushes distortion to a whole new level of creativity courtesy of new and expanded features fronted by a whole new look.

Looking closely at RP-Distort 2, it becomes apparent that it shares some similarities with one of Rob Papen’s more recently released plug-ins — namely, the stereo delay that is DelSane (https://www.robpapen.com/DelSane.html), to which it owes its innovative DISRUPT ‘sphere’. Says Rob Papen himself: “This allows you to control several different modulation parameters at once, and it gets even more exciting if you use the newly-added AUDIO FOLLOWER to take control of the DISRUPT ‘sphere’!” 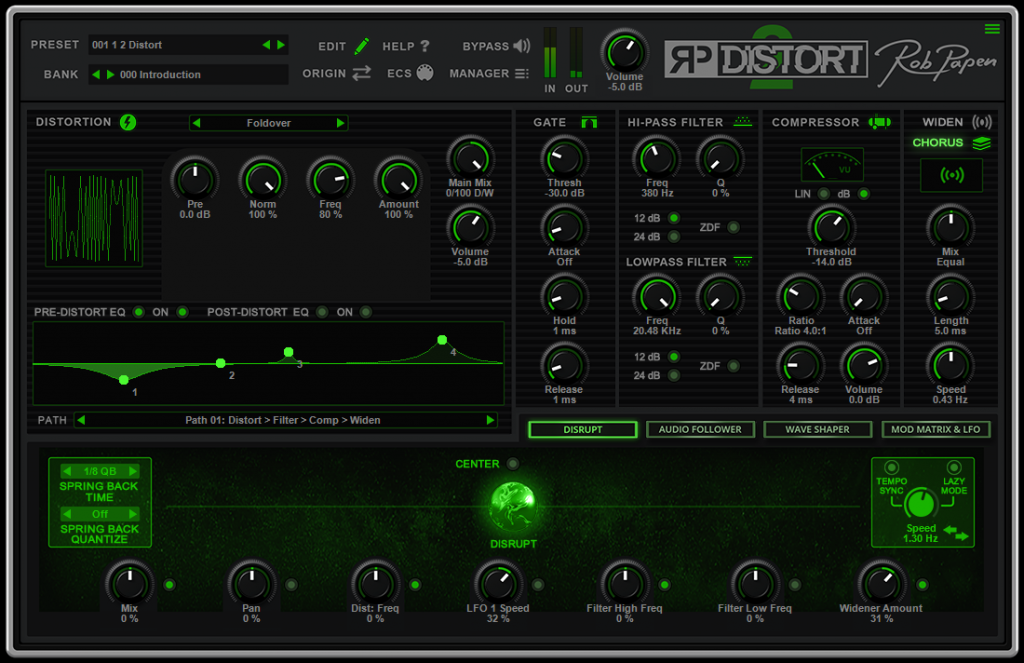 Saying that, the DISTORTION module remains at RP-Distort 2’s heart, however, but now boasts no fewer than 52 Distortion types, including Lo-Fi; 2 Band Distortion; Amp/Cab models, and much more. Moreover, it has been expanded with a four-band PRE-DISTORT EQ and a four-band POST-DISTORT EQ with variable frequency and bandwidth control, both of which can be operated graphically or, alternatively, with knobs (by activating the original RP DISTORT 1 EQ setting), and is rounded out with a noise GATE. Another addition well worth noting here are the double WAVE SHAPER editors — having first selected Dual Wave-Shaper as a WaveShaper distortion type — to create custom distortions.

An analogue-modelled ‘Filter’ module — expanded to include ZDF (zero-latency) options for its HI-PASS FILTER and LOWPASS FILTER — sits alongside a COMPRESSOR module, now with a dB (logarithmic) mode and a LIN (linear) mode, while the original WIDEN module has also been expanded to include a CHORUS mode. It is now possible to rearrange the order of these modules in the PATH section; once selected, the audio signal path order is instantly visualised in the new user interface.

Meanwhile, modulating various parameters has been taken to a new level with the MOD MATRIX & LFO section, allowing users to choose from a regular (MOD MATRIX) or ADVANCED MODE modulation matrix, complete with four LFOs (Low Frequency Oscillators) — LFO 1 through to 4 — that can be tempo- based and triggered in various ways.

What’s more, RP-Distort 2’s easy-to-use MANAGER makes light work of organising presets and BANK FOLDERS. Fortunately for those taking a trip into its wonderfully-creative world of ear-opening distortion, RP-Distort 2 comes packed with perfectly pitched presets — “…fantastic for any style of music, and for those that aren’t afraid to experiment!” So says self-confessed synth freak and world-renowned sound designer Rob Papen as someone who should surely know what he is talking about.

Anyone who purchased the original RP-Distort directly from Rob Papen will have received a free upgrade to RP-Distort 2 via e-mail while anyone who purchased the original RP-Distort from an authorised Rob Papen reseller in either February, March, or April 2022 should simply e-mail their receipt to info@robpapen.com to claim their free upgrade to RP-Distort 2; purchases prior to those months qualify for the regular upgrade price of €19.00 EUR/$19.00 USD.

RP-Distort 2 is included in the latest version of eXplorer-7 (https://www.robpapen.com/eXplorer-7.html), an inspirational bundle of 28 Rob Papen products.

A 30-day demo version of RP-Distort 2 with disabled preset loading/saving functionality is available from here: https://www.robpapen.com/rp-distort-2-demo.html