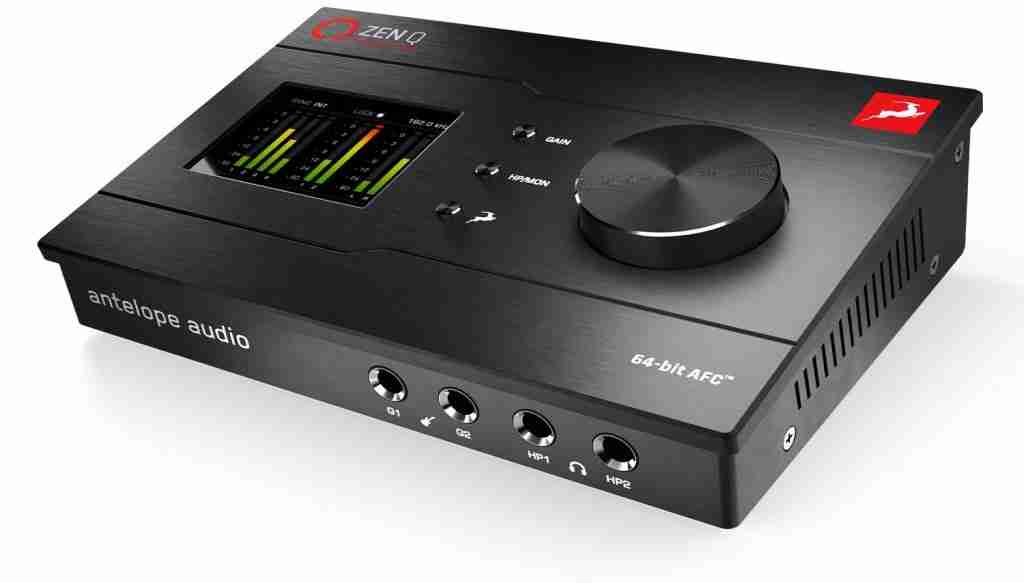 Equally impressive is Zen Q Synergy Core’s comprehensive connectivity belying its diminutive desktop-friendly footprint. The two Discrete ultra-linear pre- amps with 65dB of gain for studio-quality recordings both work as microphone/line/Hi-Z inputs on rear panel-positioned combo XLR jacks (marked MIC- XLR and LINE / HiZ 1/4” JACK), and supply 48V of phantom power — perfect for those Edge microphones. Moreover, there are two DC-coupled line outputs over TRS (labelled LINE OUT 1 and LINE OUT 2), also allowing the audio interface to transmit CV (Control Voltage) to an analog synthesizer should adventurous users wish to do so. Stereo monitoring comes courtesy of another two TRS outputs (marked MONITOR 1 and MONITOR 2). It is possible to take advantage of (up to) eight additional channels, digitally, thanks to the ADAT IN connection, with further digital connectivity provided by the two- channel S/PDIF IN and OUT connections. Ultimately, ultra-low latency and utmost stability comes courtesy of a bus-powered ThunderboltTM 3 port providing up to 16 input and 16 output channels for any popular DAW (Digital Audio Workstation) with custom macOS and Windows drivers duly installed. Readily record from any location with no need for a dedicated power source since the audio interface itself is powered by that ThunderboltTM 3 connection — and all without the user ever having to question Zen Q Synergy Core’s rock-solid reliability. And as if that was not enough to be getting on with, there are also two (front panel-positioned) line/Hi-Z inputs, ideally suited for recording (lower than line level) guitars — hence being labelled G1 and G2 (with an associated guitar icon), alongside two stereo headphone outputs (HP1 and HP1) with independent gain control over TRS.

Squeezing such an awe-inspiring array of connectivity and operational flexibility out of such a compact-sized audio interface is an appreciable achievement, allowing Zen Q Synergy Core to be easily integrated into any setup or style of workflow. Indeed, its portability effectively enables users to take their studio wherever they need to go, whether recording on location or performing an onstage live set… stream or record and mix with low latency — and no power supply required!