Audified’s AmpLion Pro has proven popular with discerning DAW-driven guitarists as a complete software processor since its introduction to widespread critical acclaim during 2014’s long hot summer. Several years is a veritable lifetime in the wonderful world of ITB (in the box) mixing — exclusively inside a DAW (Digital Audio Workstation) once tracking is complete; indeed, it is also a veritable lifetime in terms of computing power pressed into running those plug-in-hosting DAWs. Readily revamping its software stalwart as a rip-roaring plug-in putting three legendary amplifier models, four cabinets, 15 stomp boxes, and 10 microphones meticulously recreated using state-of-the-art component modelling alongside a totally redesigned GUI and numerous new features into the hands of present-day DAW-driven guitarists is easier said than done, however. Having taken time to combine its proprietary research with the latest trends in the scientific community, AmpLion 2 Rock Essentials’ power amp section uses a loudspeaker impedance model to replicate the interaction between the power amp tubes, output transformer, loudspeaker, and power amp feedback, while its analog delay and modulation effects use a bucket-brigade delay model with an exact number of buckets and virtual clock rate instead of a simple delay to add a small amount of aliasing to the sound output, heard as a typical ringing sound; all are latency-free for immediate playing response, including the all-important cabinet models. Audified ably applied the best of both worlds to design a new real-time nonlinear dynamic circuit equations solver which was used as the basis for modelling all circuitry creating AmpLion 2 Rock Essentials’ stunning sound — essentially encompassing a gear selection anchored around absolute rock staples, as implied by its apt appellation.

Those three amplifier models are as varied in tone and as great-sounding as their real-world hardware counterparts when imaginatively implemented in AmpLion 2 Rock Essentials: meticulously modelled after a small-sized yet monster-sounding low-wattage amp of choice for many players across many genres — gracing recordings ranging from traditional country to alternative rock, Bartender Delux 65 offers two main channel choices, each with low and high INPUT option, a hyper-realistic, separately-engaged spring REVERB, and a choppy or lush VIBRATO, plus (Rear & Mods Panel-accessible) Pushed mode; JUKEBOX 30 musically mines a rich rock spectrum of classic sounds with a NORMAL channel acting as a perfect companion to using treble boosters (of which two are included in AmpLion 2 Rock Essentials’ extensive stomp box selection), switchable REVERB and TREMOLO, plus TOP BOOST controls, as well as Rear & Mods Panel-selectable Voicing and Custom EQ options; Martial 59 realistically represents a real rock legend (without which rock ’n’ roll itself might never have happened) with a traditional four-input configuration and a parallel channel holding the key to screaming rock sounds, while Master and Pushed options are also available alongside Rear & Mods Panel-selectable SLP/HW/Brown sound revision switches and Ohm selection — the latter making a noticeable difference in itself! Indeed, the three amps in question have been modelled above and beyond their standard stock real-world hardware counterparts courtesy of Audified’s own custom mods, fan-favourite mods, specific tweaks, and various version revisions — all accessible via their respective Rear & Mods Panel-positioned additions. 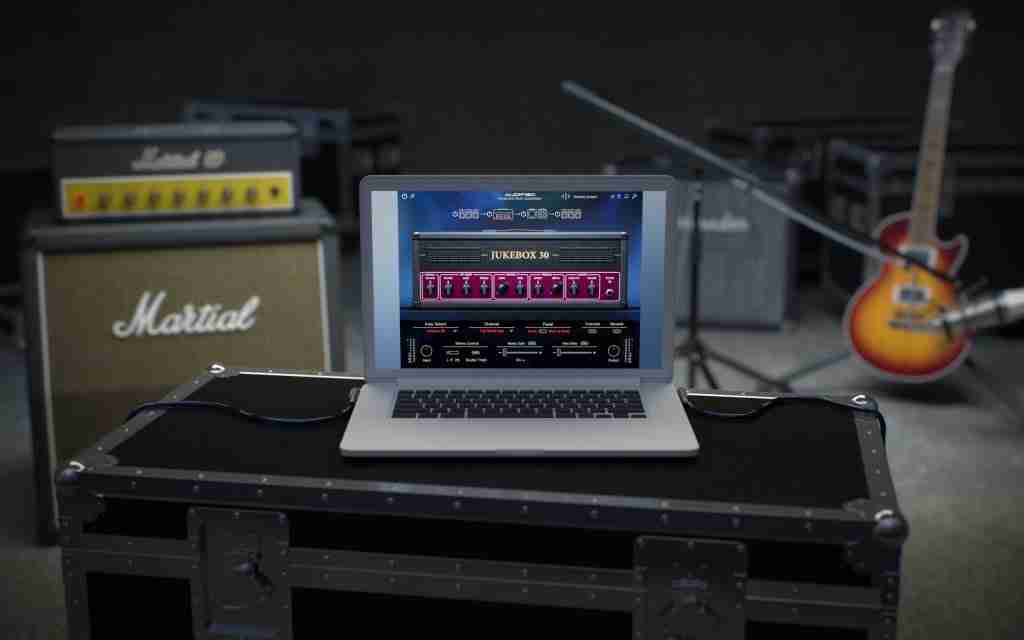 All adding their own distinctive dimension to the discerning DAW-driven guitarist’s tone palette, AmpLion 2 Rock Essentials features four cabinet models: Bartender 112 J represents the sound of a classic 1×12” combo and a J-style speaker as a matching cabinet for the Bartender Delux 65 amp model to duly deliver tightness with low- end focus, though of course can also be paired with AmpLion 2 Rock Essentials’ other amp models; JUKEBOX 212 GB models one of the most classic 2×12” cabinet designs ever created, matching the JUKEBOX 30 amp model to create clean through to crunchy sounds, as well as variations thereof when used with either of the other two amp models; modelling classic 4×12” half-stacks, Martial 412 GB and Martial 412 G12A are both a perfect match for the Martial 59 amp model, the former being fuller in bass response with somewhat scooped mids while the latter is more focused on mids for a tighter tone — combine them in stereo or work with Double Track mode for fulsome fun and tumultuous tones! Audified’s AmpLion 2 Rock Essentials enables various ways of working with the cabinets — selecting only one as active allows the mic to be panned across the stereo field, for example, but blending two cabinets leaves the pan centred, or use two cabinets and mics to pan them hard left and hard right, while taking the aforesaid Double Track route results in a different sound altogether.

By building upon a lengthy legacy of virtual stomp boxes that led up to MultiDrive Pedal Pro — pushing further forward with Audified’s virtual stomp box breakthroughs by bringing the legacy of erstwhile brand DSound’s first guitar software (released as Stomp’n FX Vol. 1 and Stomp’n FX Vol. 2 way back in 2000) and later featured, for instance, in Audiffex’s inTone2, AmpLion 2 Rock Essentials features 15 new and redesigned stomp box models, including two T-Boost treble-boosters with their not-so-widely modelled Sixties- and Seventies-vintage sound, as well as overdrives and distortions aplenty — 808 IceScreamer, distortion PULS, Melted Face Fuzz, and O-DRIVE 1; very versatile Jukebox Wah 84; MEMORIZED DELAY, DigiDelay, and DigiVerb delays and reverb; mrs. flanger, STONED PHASER, and CLONED CHORUS modulation effects; plus proprietary stomp box equalisers — GraphEQ and ParaEQ. Pushing flexibility further forward, AmpLion 2 Rock Essentials encompasses two pedalboards with one positioned before the amp and the other after the whole rig; while wah and drive stomp boxes are restricted to only pre-placement availability and DigiDelay and DigiVerb are restricted to only post-placement availability, all other stomp boxes are available to both. But wherever they are positioned, all work wonders when finalising guitar tones!

Audified’s AmpLion 2 Rock Essentials comes complete with 10 fan-favourite mic models — 121 Rodger, 414 OMG, 421 Sensei, 451 Pencil, 57 Legend, 5i Audition, 7B Podcaster, 87 Oldman, and 906 S-Cube, plus a special Flat response model — based on thorough and repeated measurements in an anechoic chamber for amp and cab recording and re-amping. Moreover, maximising tonal variability is a given when using different mic models with different cabinet models and experimenting with their positions. Position and Distance controls are self explanatory, and are based on real science, yet AmpLion 2 Rock Essentials ups the recording ante still further by also offering a Mic Angle function ranging from a default position of 0 degrees — positioning the mic perpendicular to the cabinet grill cloth — to 75 degrees. Different mic’ing techniques are available to all with the greatest of ease.

Elsewhere, an advanced Noise Gate algorithm is thoroughly pre-tuned to assist AmpLion 2 Rock Essentials users with eliminating noise, even when using high gain, while the proprietary Hiss Gate function even eliminates subtle pickup noise amongst other things — without affecting playing dynamics in any way — by being based on envelope tracking for both signal level and signal frequency bandwidth with automated release time to work both for palm muting and playing solo with the same settings.

AmpLion 2 Rock Essentials is available to purchase for an introductory price of $79.00 USD — rising thereafter to its regular price of $149.00 USD — from Audified’s online shop, which also includes further information and sound samples, here: https://shop.audified.com/products/amplion-2-rock-essentials