Cassette is an audio plugin that imparts the unique character and sonic imprint of an often maligned recording medium. A one that offers a sound like nothing else and that I’m in love with. This is not a tape machine, this is a time machine.

Cassette is an audio plugin that emulates the sound of vintage cassette tapes and decks. It has been carefully modelled after exhaustive analysis of a high number of sound signals recorded into real tapes. As a result, we get the same sound and behaviour of the original units.

Magnetic tape is not a sterile media. Because of that, it will impart its own sound signature to signals recorded into it. These include a different frequency response, frequency dependent saturation, high-frequency compression, hiss, asperity noise and much more.
Reproduction systems will also induce their fingerprint: wow, flutter, random high-frequency loss, crosstalk between channels, stereo unbalances and other.

All of these little quirks and random fluctuations have been modelled meticulously. Cassette imprints instant nostalgia, movement and analog feel all around in its path.

Cassette has been designed to be fun, pleasant to the ear and true to the medium. 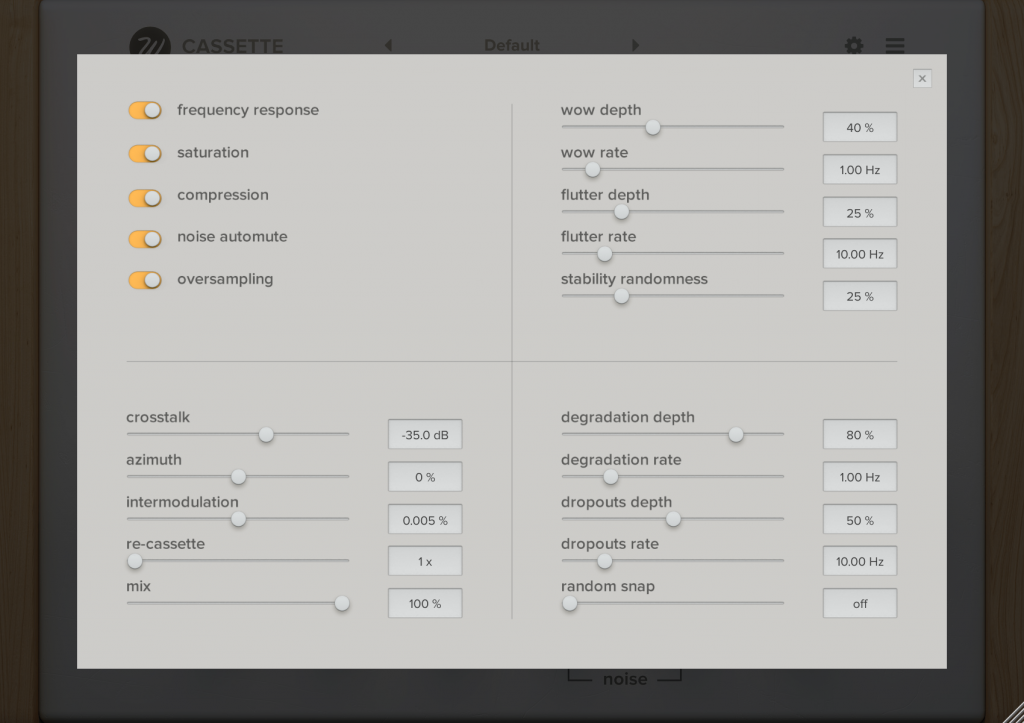 There’s much more power under the hood than what you see at a first glance.
We can find 4 sections:

As you can see in this panel, Cassette uses oversampling in order to get rid of aliasing. The plugin always works at 192KHz sampling rate internally.

We modelled the four cassettes types available. Each one delivers different sonic characteristics.

Changing tapes will have an effect in the frequency response of the plugin but also in the saturation, compression, static noise (hiss) and dynamic noise (asperity noise).