Apogee is introducing Clearmountain’s Domain, a multi-effects plugin that reproduces legendary mixer, Bob Clearmountain’s personalized FX signal chain. The plugin simplifies Clearmountain’s very sophisticated and creative hardware routing, making it easier to emulate the cohesive spaces, expansive dimensions, and rich atmospheres his most celebrated mixes are known for. Classic presets allow you to recreate the sonic environment of your favorite Clearmountain mixes. Advanced view tabs take you behind the scenes of Clearmountain’s technique to reveal decades of expertise and empower you to create your own musical mix domain. Custom impulse responses of Clearmountain’s favorite spaces give you access to the reverb Bob has used on countless hit records. And, the multi-color FX Visualizer lets you see the placement of all effects in real-time. Clearmountain’s Domain expands Apogee’s plugin offering which also includes the only Pultec EQ plugins to be officially endorsed by Pulse Techniques, makers of Pultec hardware. 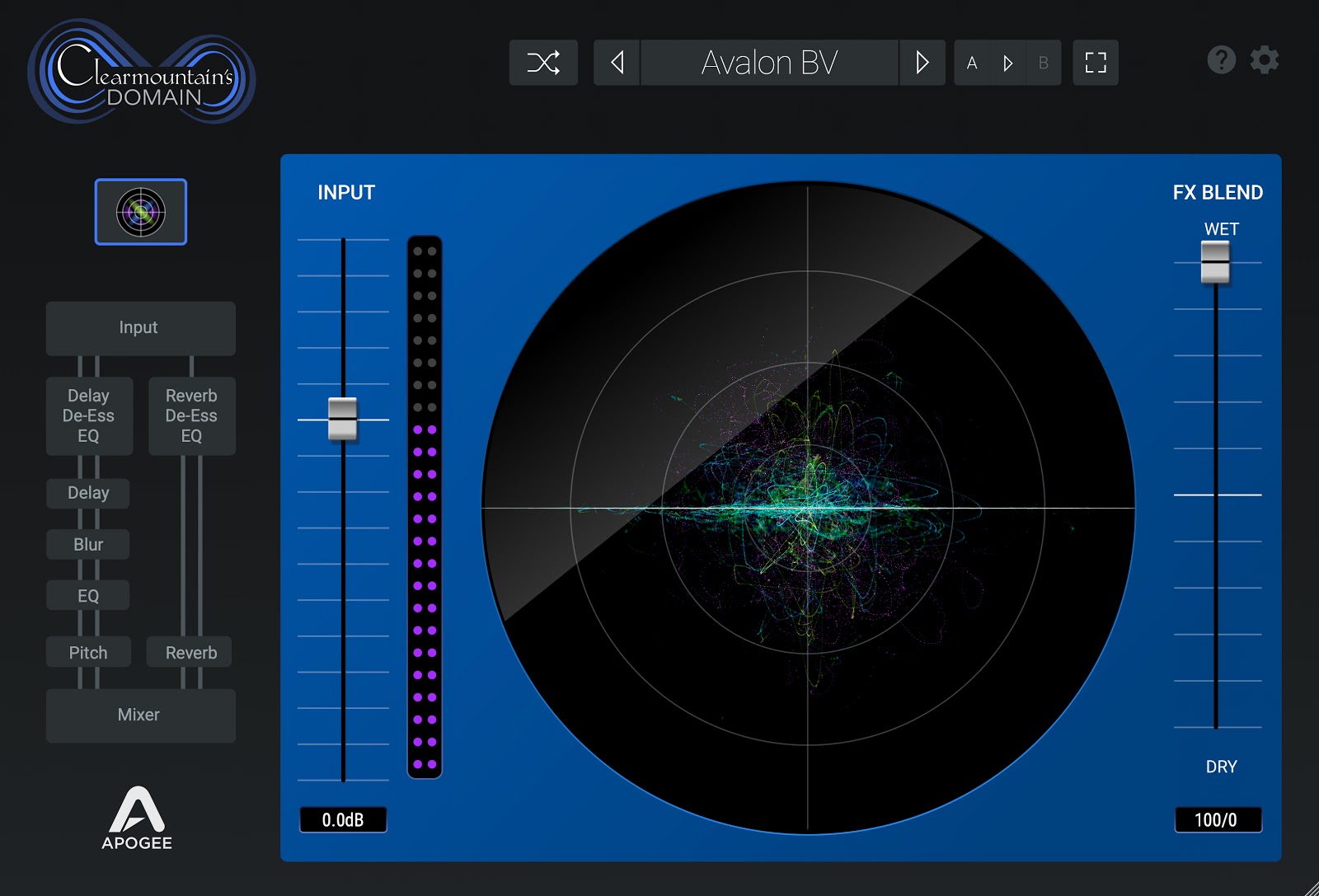 Bob Clearmountain Redefined the Role of the “Mixer”

For decades, engineers, producers, and musicians have marveled at Bob Clearmountain’s mixes. Recordings by iconic artists like David Bowie, Chic, Roxy Music, The Rolling Stones, Bruce Springsteen, Bryan Adams, INXS, and so many more are prime examples of how Clearmountain’s work elevated the role of “the mixer” to that of an essential creative partner in the process of making records. Bob’s ability to build a soundscape and atmosphere, where voices and instruments effortlessly live in an intimate space but seamlessly blend together, set new standards for mixing. His passion to reveal the true character of the song, highlighting the emotion of the music, gets to the heart of what inspired the song from its inception.

Clearmountain’s Hardware FX Workflows Made Accessible in your DAW

Over decades of mixing hit songs, Clearmountain has developed a complex and personalized hardware FX signal chain for creating the imaginary soundscapes where musical elements each have their own space and dimension, but remain cohesive to the whole.

Reproducing this complicated interconnection of hardware using individual plugins in a DAW proved to be almost impossible. With Clearmountain’s Domain, it’s refreshingly simple to achieve Bob’s results with a mere click on a preset.

Thanks to the Clearmountain Classic presets, you don’t need an Engineering degree to get started – instead, start with the awe-inspiring sounds you know and love from your favorite Clearmountain mix!

Bob has carefully created each preset based on specific instruments and processing from his extensive catalog of timeless hit mixes. Looking to nail the Bowie “Let’s Dance” guitar and vocal delay or the Springsteen “Born in the USA” snare sound? Simply load the presets! 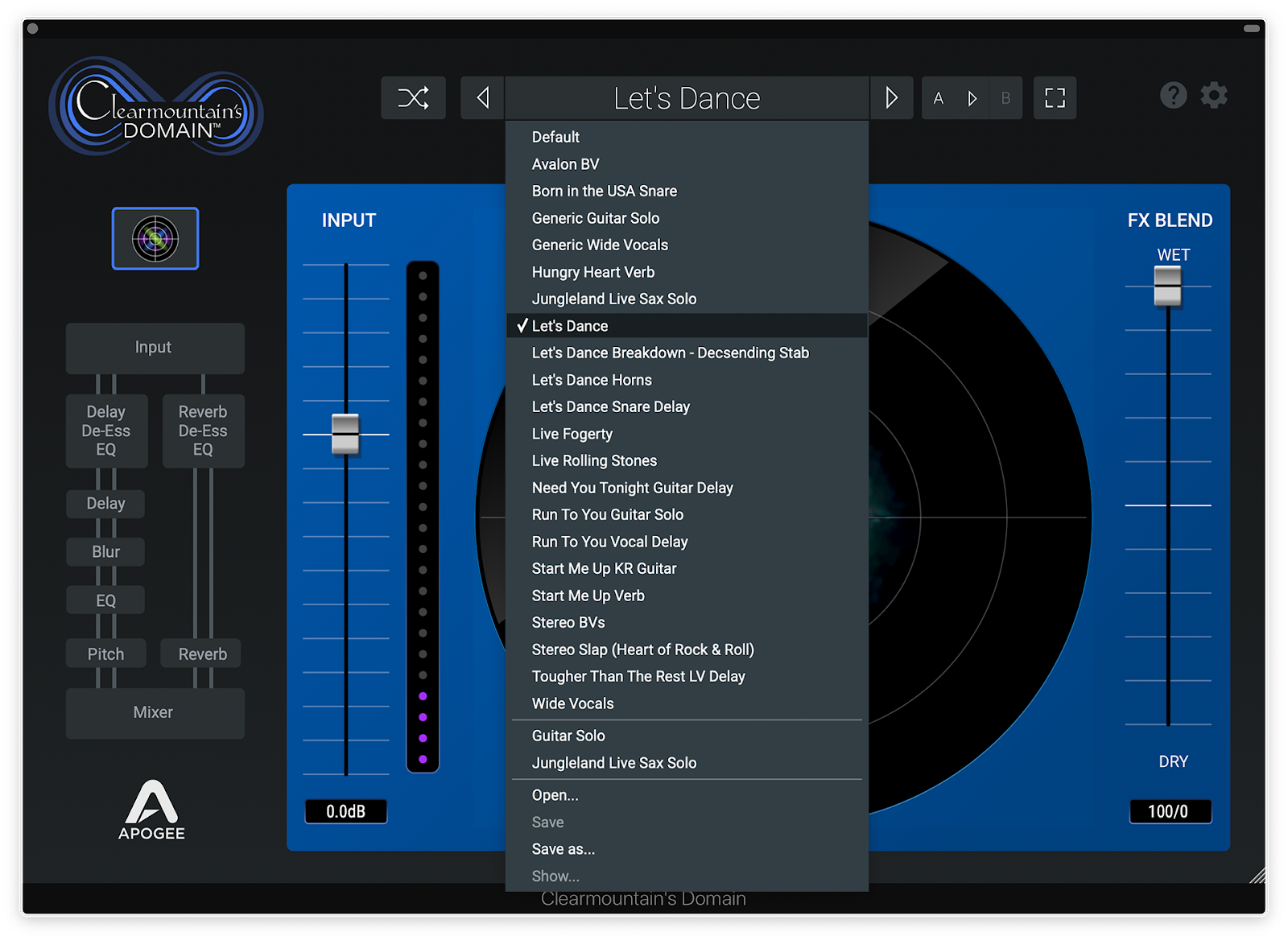 Earlier in his career, Clearmountain leaned heavily on physical rooms and chambers for realistic and unique reverb – for example, the custom designed echo chambers at his Mix This! studios in Los Angeles.

Once convolution reverb technology allowed him to “capture” the characteristics of his favorite rooms as digital impulse response files, he was free to use all his favorite spaces no matter their location.

With Clearmountain’s Domain, you now have access to these spaces, the very ones used on countless hit mixes.