Today Apple released a new version of Logic Pro X, its professional music production software, with performance updates for all users and optimizations that take advantage of the groundbreaking power of the all-new Mac Pro. Making full use of the Mac Pro hardware, Logic Pro X 10.4.5 will now support up to 56 processing threads, allowing pro music producers and film composers to work through incredibly demanding music projects with unprecedented ease.

Mac Pro together with Logic Pro X 10.4.5 allows pro musicians to do things never before possible in the production process. With the new Mac Pro, Logic can now run up to five times the number of real-time plug-ins compared to the previous generation Mac Pro. Logic Pro X 10.4.5 increases the available track and channel count for all users, now supporting up to 1,000 audio tracks and 1,000 software instrument tracks, providing four times the number of available tracks for the most complex productions. Additionally, Logic Pro X now supports 1,000 auxiliary channel strips, 1,000 external MIDI tracks and 12 sends per channel strip. Users can also expect improved responsiveness of the Mixer and Event List when working with large sessions, and projects with numerous Flex Time edits and tempo changes perform more efficiently than ever. 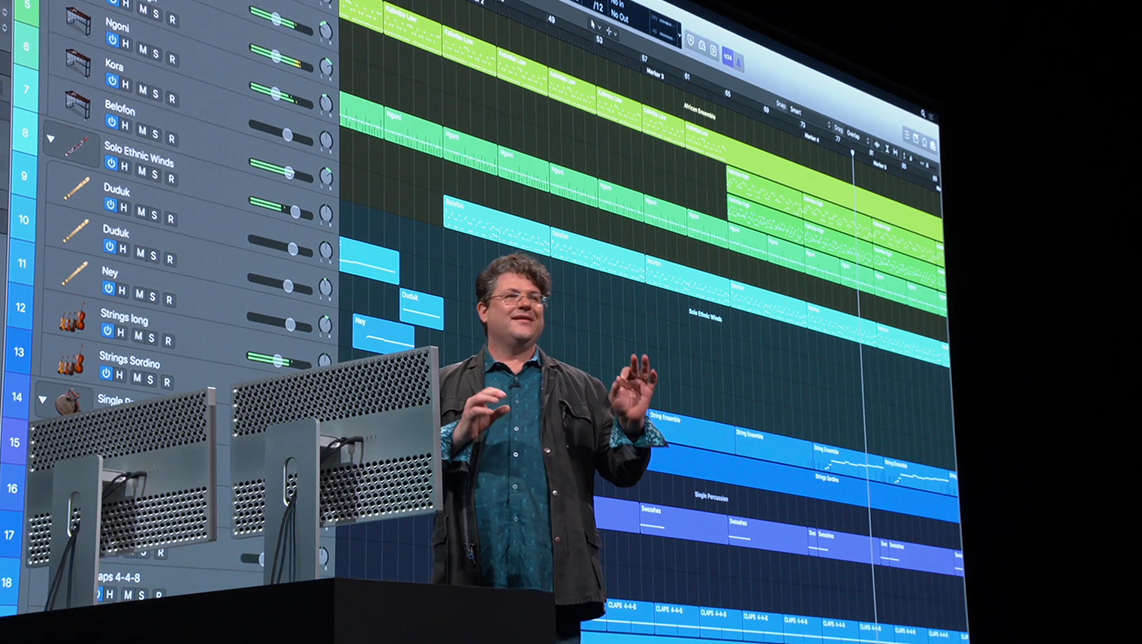 “Logic is my primary creative tool for composing music, playing a key role in creating the scores for ‘Spider-Man: Into the Spider-Verse’ and ‘The Dark Crystal: Age of Resistance.’ When you’re working, time is incredibly valuable and you never want to lose the flow of new musical ideas. I’m really excited to see the increased performance of Logic Pro X 10.4.5 along with the power, expandability and configurability of the new Mac Pro — together they will help me work even faster and let me focus more on being creative.” — Daniel Pemberton, composer for “Black Mirror,” “Yesterday” and “Ocean’s 8”

“Sometimes, a producer will subconsciously avoid exploring certain creative ideas because they think their hardware and software might hold them back. Logic Pro X 10.4.5 and the new Mac Pro are going to lift those limitations. In addition to the dramatically increased track count, there are a lot of little things in the new version of Logic that really add up. It’s great seeing Apple’s commitment to delivering these high performance tools for pros.” — Stuart Price, producer and mixer for The Killers, Madonna, Coldplay and Seal

“Music producers use technology to help us produce our art, and we’ve been waiting a long time for a system without limitations or bottlenecks. I’m deeply impressed by the remarkable performance of the new Mac Pro and Logic Pro X. This is a genuine turning point, as the creative possibilities now seem endless.” — Rich Costey, producer and mixer for Muse, Foster the People, Snow Patrol and Chvrches

“As someone who uses Logic for everything I create musically, I got a huge kick seeing all the performance tweaks coming in Logic Pro X 10.4.5. And the expandability of the new Mac Pro will give it longevity and a home in my studio for a long time to come. It’s clear that Apple is committed to the pro community, and I love that they are really listening and paying attention to our needs.” — Oak Felder, producer for Demi Lovato, Drake, Alicia Keys and Rihanna

Logic Pro X 10.4.5 is available today as a free update for all existing users, and is available on the Mac App Store for $199.99 (US) for new customers. For more information, visit apple.com/logic-pro.