SSL Fusion In The Mix For Manny Marroquin

Marroquin is one of the go-to mix engineers on the planet. The eight-time GRAMMY winner is a multi-instrumentalist, and label-owner; and his work has been revered for more than 20 years, earning him eight GRAMMYs along the way. Marroquin works from two studios in Los Angeles’ epic Larrabbee Studios complex, both of which house an SSL K console. Recently, he discovered SSL’s new Fusion analogue processor, which has become a regular feature on his many mix projects.

“We were installing an SSL Duality in studio four over at Larrabbee,” recalls Marroquin. “And they brought in this new box, and said it was the first piece of gear SSL had built in a long time, so I was excited to check it out.”

Rather than put it straight on his mix buss, Marroquin started off using the Fusion on stereo keyboard tracks, then guitars.

“Because I am still on the big SSL – so not in the box – I’ve been using Fusion as an insert,” he says. “I have got to tell you, I just loved what I heard. It’s like having a chain of three or four different plugins all in one. And if like so many people, you are working in the box, you can just put it across part of your stereo buss chain, which is great, because it’s got an EQ, it’s got a Vintage Drive, a spreader – it’s just a very versatile box, and one of my favourite toys right now!”

Fusion can really improve the stereo image of a sound, Marroquin reveals: “I have been using it on a lot of synths – especially if they’re playing a melodic line, because Fusion allows me to control how wide I want it to be: I can EQ it very quickly, I can add filters to it; I can make it so that it fits perfectly in the mix, and it’s still punchy. I am sure I can use it on a lot of other things, too – on backing vocals for R&B records, I know this will sound delicious.

“It’ll also work as a great sweetener, so you can make your mixes super-wide using this box; and SSL have done such a great job too, as it’s so simple. Some mixers will do a whole song, and at the very end, they’ll just slap on that final EQ or compressor, or a tiny little bit of air at the end of the mix; not to master, but to give it that extra 5%. And this is perfect for that. If you’re in the box, put Fusion on bypass, have it in your chain, then towards the end of your mix, just pop it in, and wait for the whole mix to pop out, man!”

“I have got to tell you, I just loved what I heard. It’s like having a chain of three or four different plugins all in one. And if like so many people, you are working in the box, you can just put it across part of your stereo buss chain, which is great, because it’s got an EQ, it’s got a vintage drive, a spreader – it’s just a very versatile box, and one of my favourite toys right now!”
Manny Marroquin 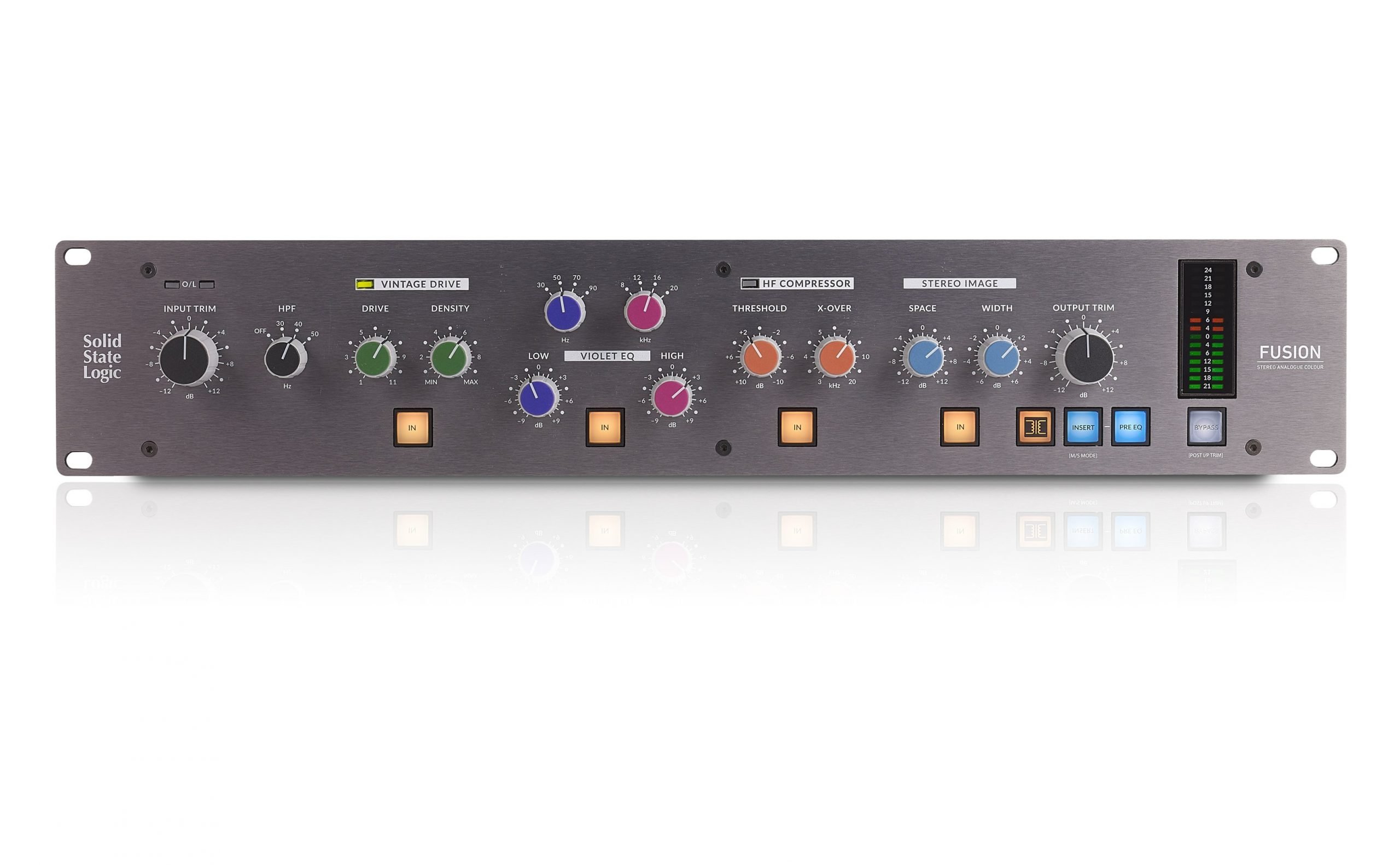 Marroquin is so impressed by Fusion, he’s thinking about getting another unit for his second room at Larrabbee.

“Just because I love it so much!” he says. “But SSL are also doing something really cool here: products like Fusion will really open the door to the new generation of kids who are not as familiar with SSL as they are with some of the popular plugin manufacturers, so it’s a very positive move. And they’re not abandoning what they’re really good at: making great hardware pieces.

“I honestly don’t think it compares to any box out there. When I was creating my [Waves] plugins, one of them was a delay; I made it so you can have filters on that delay – which is great – or put a phaser on it, or some distortion – so it doesn’t only delay, it’s a few more things. And that’s like Fusion: this is a box that does three or four great things really well: it’s got filters, so I can EQ my mix; it’s very tasteful in that it gives you just enough to colour, but doesn’t overprocess the sound; and it helps you shape your final mix.

“I’ve used it on things that I feel are focal points in my mix process, and Fusion does subtle things that doesn’t change the source for you to go ‘whoa, this sounds weird’, but there is just an amazing depth to it that just kind of pops out of the speakers, and that is what is so impressive about it.”