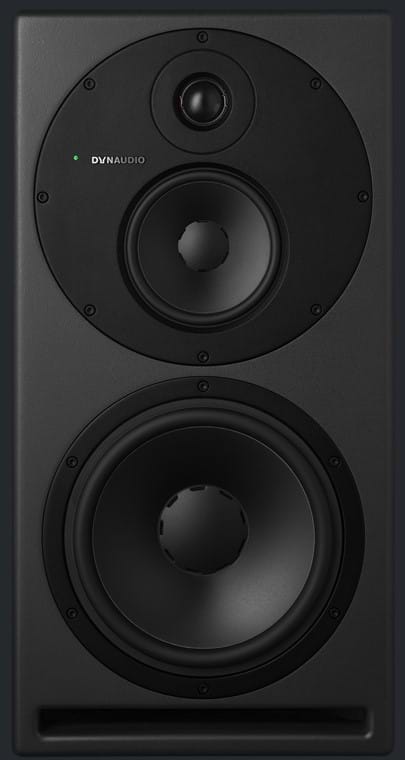 Core 59 – the flagship of our high-end professional reference monitor series – is that monitor. This three-way speaker features uncompromising class-D amplification, cutting-edge digital signal processing, a super-inert 32mm-thick baffle and a flat bass response down to 42Hz with -6dB at 36Hz.

It’s a serious system designed for serious audio professionals. Core 59 has been made for the highest-demand environments that recording engineers, mixers, producers, and editors work in – and has been specifically designed to solve many of the monitoring issues that career professionals face every day.

Listen all day (and all night) without fatigue


Listener fatigue is the thorn in the side of every studio engineer. Once it sets in, you’re done for the day. Core 59’s all-new Esotar Pro tweeter has been created to keep fatigue at bay so you won’t be finished before the mix is.

We’ve long been known for our sweet-sounding soft-dome tweeters. They provide hours of pinpoint imaging and detail without the tiring quality that’s common to other designs. The Esotar Pro builds on this heritage with the ingenious Hexis device. It’s an inner dome that sits just behind the diaphragm and optimises airflow, smooths the frequency response and eliminates unwanted internal resonances. The result is outstanding imaging, transient detail, and effortless high frequency response.

The speaker’s 5in midrange driver provides staggering detail. It uses our proprietary MSP (Magnesium Silicate Polymer) material in its cone for the best combination of lightness, stiffness and damping and, coupled with an aluminium voice-coil, has an incredibly fast response and authoritative control from its neodymium magnet system. With crossover points at 312Hz and 5.1kHz, Core 59 delivers so much more of the critical vocal range in one driver than typical designs, ensuring your mix decisions on vocal balances and dialogue subtleties are made with total confidence.

Core 59’s new bass driver has emerged from over 18 months of intensive study into subwoofer driver technology, including our 18S subwoofer, which dives all the way down to 16Hz. The outcome of that research is a new copper voice-coil and glass-fibre former, pushed by ceramic magnets and a 500W class-D Pascal amplifier. It gives the 9 1/2in long-excursion woofer even more grip on the bottom without sacrificing a deep frequency response.

And because each driver is handmade in our factory in Denmark (we produce 1.4 million drivers each year for our home hi-fi, custom-install, in-car and pro-studio speakers), we can maintain incredible consistency. That means you can use Core monitors in multiple studios and have them all sound and perform at the same high level – everything you need to hear, everywhere you go. Should you need to replace a driver, you can either do it yourself and calibrate it to within 0.XdB as on the AIR series, or have your service centre do a full factory-level calibration.

Ultra-flexible positioning and the Orbit baffle


When we revolutionised studio monitoring with the AIR series, we also revolutionised speaker positioning. Literally. AIR made it possible to use a three-way speaker in multiple orientations without compromising the midrange driver and tweeter’s phase response by using sealed midrange and tweeter assemblies that can be rotated in the cabinet.

Core 59’s Orbit baffle rotates too, so you can use it in left, right, or centre-channel orientation. You can even position the woofer above the tweeter/midrange assembly to accommodate placement in front of a console in an LCR array.

Since every application is unique and monitors may need to be placed in a variety of environments – on their sides, vertically or sometimes even inverted – we’ve given Core 59 indentations on all four sides. Just fit our special Dynaudio pads to protect the cabinet’s finish and stabilise it on the mounting surface.

Core 59 is also compatible with standard VESA mounting brackets or our custom K&M bracket should you want to mount them on walls or the ceiling as part of a multichannel or immersive-audio reference system such as Dolby ATMOS. 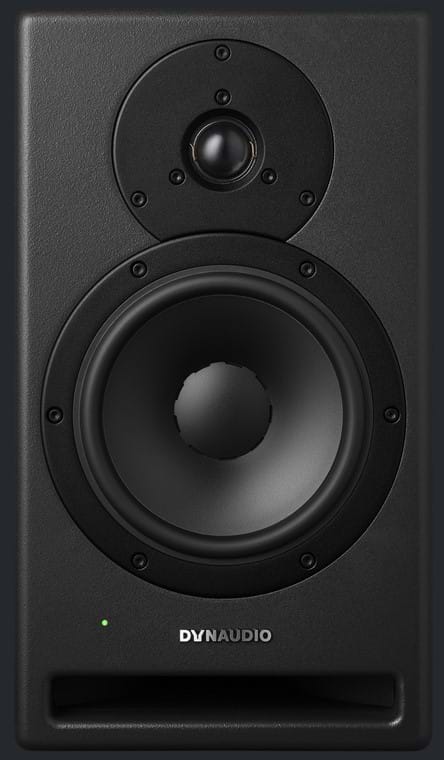 Core 7 has been developed alongside industry professionals with exactly this in mind. It’s the most compact model in our range of high-end professional reference monitor systems. This no-compromise two-way design features two class-D amplifiers (one 500W amp for the mid/woofer and a 150W unit for the tweeter), plus the best of modern DSP technology and a flat bass response down into to 44Hz with -6dB at 38Hz.

It’s been specifically designed and engineered to meet the challenges of high-demand environments that recording engineers, mixers, producers, and editors work in all day, every day.

Consistent performance with no fatigue


Our acoustic designers are always improving on driver design for each model – and when they wheeled Core 7 out for listening tests, you could genuinely see the pride on their faces.

Each driver unit is handmade at our factory in Denmark. And because we produce 1.4 million drivers each year for the home hi-fi, custom-install, in-car and pro-studio markets, we can ensure extreme consistency. That makes it possible to use Core monitors in multiple studios and have them all sound and perform at the same high level – giving you everything you need to hear, everywhere you use them.

We’re known for our soft-dome tweeters. They provide hours of pinpoint imaging and detail without the listener fatigue common to other designs. Core 7 builds on this heritage with the brand-new Esotar Pro tweeter – the latest breakthrough in our engineers’ obsessive attention to driver detail. New advanced manufacturing techniques and our astonishing Jupiter testing facility, have let our designers take tweeter design to a new level with the revolutionary Hexis system. Hexis optimises airflow, smooths frequency response and eliminates unwanted internal resonances. The result? Jaw-dropping imaging and transient detail, and effortless high-frequency response.

But they weren’t happy to leave it there: Core 7’s mid/woofer driver is another leap forward. We’ve taken our proprietary MSP (Magnesium Silicate Polymer) cone material along with aluminium voice coils, glass-fibre formers and advanced magnet designs to produce drivers capable of the kind of accuracy and honesty you’d never thought possible. MSP provides the best combination of lightness, stiffness and damping – making it capable of producing deep, accurate bass while also delivering natural midrange detail, all in one driver for the best imaging and point-source delivery.

Under the hood: how to set up Core 7 for your studio

The active Dynaudio AIR series was famous for its advanced digital signal processing. Our acoustic engineers continued this forward-thinking approach by taking the past 18 years’ worth of DSP innovation and applying it in a simple, easy to use system with the Core series. Make no mistake, though: under the hood is a sophisticated system that makes light work of challenging studio environments.

Positioning is critical when installing a monitor system. That’s why each Core 7 has two DSP filter switches to address its position and boundary locations. For example, if you place the monitors on the meter bridge of a large-format mixing console, set them to ‘Desk’. This will help compensate for the first reflection created by the mixing surface. On the other hand, if you put the monitors into a purpose-built wall, setting the Position 1 filter to ‘Soffit’ will compensate for the increased bass response.

Boundary effects created by placing a monitor close to walls or a ceiling can be compensated for by adjusting the Position 2 filter between ‘Wall’ or ‘Corner’. These filters help compensate for the reflections created by the boundary walls, especially in the lower frequencies. There’s also a low-frequency 80Hz Linkwitz-Riley cutoff that can be engaged if you’re using Core 7 with a subwoofer to extend the low frequency response.

Users can also alter the overall presentation. Core 7 uses the same concept as the LYD series Sound Balance filter – a different design to typical shelving-EQ tweeter and woofer adjustments found on most active monitors. Instead of simply fine-tuning the tweeter level up or down, which will affect phase response, Core 7 uses a full-spectrum band-pass filter that tilts depending on the desired tonal response. In the ‘Dark’ setting, the entire frequency response is tilted so that 20kHz is down -1.5dB, while 20Hz is up +1.5dB. In ‘Bright’, the tilt is reversed (+1.5dB at 20kHz and -1.5dB at 20Hz). This gentle filter maintains the proper phase response between the drivers while providing the tone that meet your tastes. The changes are subtle, but often this little tweak is enough to make the sound balance just right.

Input sensitivity the way you want it

The noise-floor and signal resolution of any monitoring system is critical to its performance. Whether you’re using the analogue or digital inputs, you need to be able to control the gain staging between the monitor controller and the speaker system. We’ve provided a range of 0dBu to +24dBu to match the analogue input sensitivity to the output level. Once optimised, Core 7 processes all analogue signals at a 192kHz sampling rate and 64-bit resolution in the DSP (from the 24-bit analogue-to-digital converter) for the greatest degree of mathematical precision.

There’s a switch to determine the maximum output SPL with the greatest bit-depth in the DSP. If you want the maximum level, set this to 112dB. If you work mostly at lower levels, choose a lower SPL setting to optimise the bit-depth of the DSP for both inputs.

When using the AES digital inputs, you must determine which channel (left or right) of the AES stream is used for that monitor. Core 7’s DSP operates at the incoming sample rate and either locks to the digital audio clock or word clock to maintain the most accurate signal possible.

Placement options: all of them


We’ve made sure Core 7’s cabinet is as stiff and inert as we could make it – hence the 32mm thick baffle, which contributes to its excellent linearity across the spectrum. Since every application is unique and monitors need to be placed in a variety of environments – either on their sides, vertically or sometimes even inverted with the woofer above the tweeter – we’ve designed Core 7 with indentations on all four sides. We’ve even developed special pads that can be placed in order to protect the cabinet’s finish and stabilise the cabinet on the surface.

That goes for multi-channel set-ups, too: we also have custom K&M brackets to mount Core 7 in orientations suitable for surround sound, immersive audio (such as Dolby ATMOS) and other custom configurations.

One speaker, every type of studio


Core 7 is designed for maximum flexibility and performance where its compact size is desirable. This includes recording studios, edit suites, broadcast trucks, mobile facilities, broadcast and theatrical dub stages, immersive audio mixing rooms and custom installations. And because its size doesn’t diminish its performance either in frequency response or output SPL, it plays seamlessly with Core 59 monitors in calibrated multi-channel monitoring systems.